TORRANCE, Calif. — Although there wasn’t a true MVP this weekend from the third session of the Nike Elite Youth Basketball League (EYBL), the games were outstanding and the talent was exceptional. Team Takeover ended this session undefeated and should be the No.1 seed for the Nike Peach Jam in July. 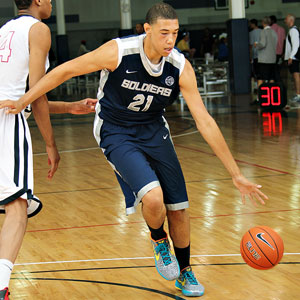 (Oakland, Calif./Bishop O’Dowd)
2012, PF, 6-foot-8, 215 pounds
Team: Oakland Soldiers
College: Undecided
The overall talent of Ashley has never been in question, but a lack of effort at times has always hindered his potential. However, this weekend he was dominant at both ends of the floor and had a number of high-level finishes — both in transition and off offensive rebounds. His ball skills and his touch out to 17 feet have improved and due to his length and blossoming skills, his potential is immense.

Aaron Gordon (San Jose, Calif./Archbishop Mitty)
2013, PF, 6-7, 210 pounds | Team: Oakland Soldiers
College: Undecided
When it comes to effort and bounce, there are few prospects who can compete with Gordon. He is a terror on the offensive glass and he has the skills and savvy to make plays at the rim or deliver a nifty assist. His jump shot needs polish as does his triple threat game (ability to face up his defender, utilize the jab step or pump fake to shoot, drive or pass), but he is definitely one of the elite prospects in the country.